I came late to the Raspberry pi movement. For a long time I didn't have any use for them so didn't get any. I was more used to desktop and server machines (my office is full of them) and I didn't see the point of the small under-powered wee things.

Things changed late 2015 when one of our media players died. We had several (one for each tv) connected to the home network with massive NAS storage. The setup allowed us to watch videos, listen to music and podcasts, etc from anywhere in the house (with a little bit of automation, one of the servers was downloading new podcasts overnight for listening the next day without having to hunt for them or subscribe to an online service).

One day before Christmas, our most used media player (10 year old Asus O!Player because it runs Linux and you can have fun with it) kind of died. It was working most of the time, but then would freeze for a minute or more. It was really irritating. The options were:
- Swap it with a less used one in the house.
- Replace it with a newer version.
- Do something else.

Swapping it with another one was the least interesting option. It would have solved the problem short term, but we would have still had a crippled media player in the house. Replacing it with a new one meant hunting for a good option. There are many out there, but it's boring to select the right one and these things are expensive. That left "do something else".

That's when I thought of the Raspberry pi. Friends of mine have been using them for a while and doing electronics projects with them. Electronics aren't my thing, I'm a software guy, but I could do something with the software: install xbmc as I recalled (now Kodi ir turns out) and nearly out of the box it would replace the media player.

I therefore got one, installed OSMC (yes, the easy solution for a first attempt), connected to the remote storage over the network via wifi, and there you go, new media player in a couple of hours. 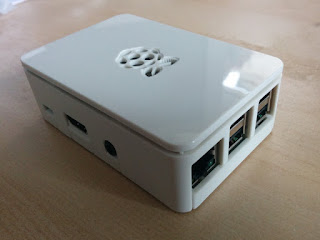 It worked so well, that I replaced another O!Player with a second pi. The pi family was already growing and it was only the start.
Posted by Cedric Raguenaud at 14:34